The foundation of our technology for combined heat and power (CHP) systems is through cogeneration. CHP generation and cogeneration are often used interchangeably, with the term cogeneration being more widely used to describe the process, while CHP is referenced as the power plant.

On this page, we introduce you to this technology and explain its functionality, demonstrating the role it can play in the energy transition.

THE PRINCIPLE OF COMBINED HEAT AND POWER GENERATION 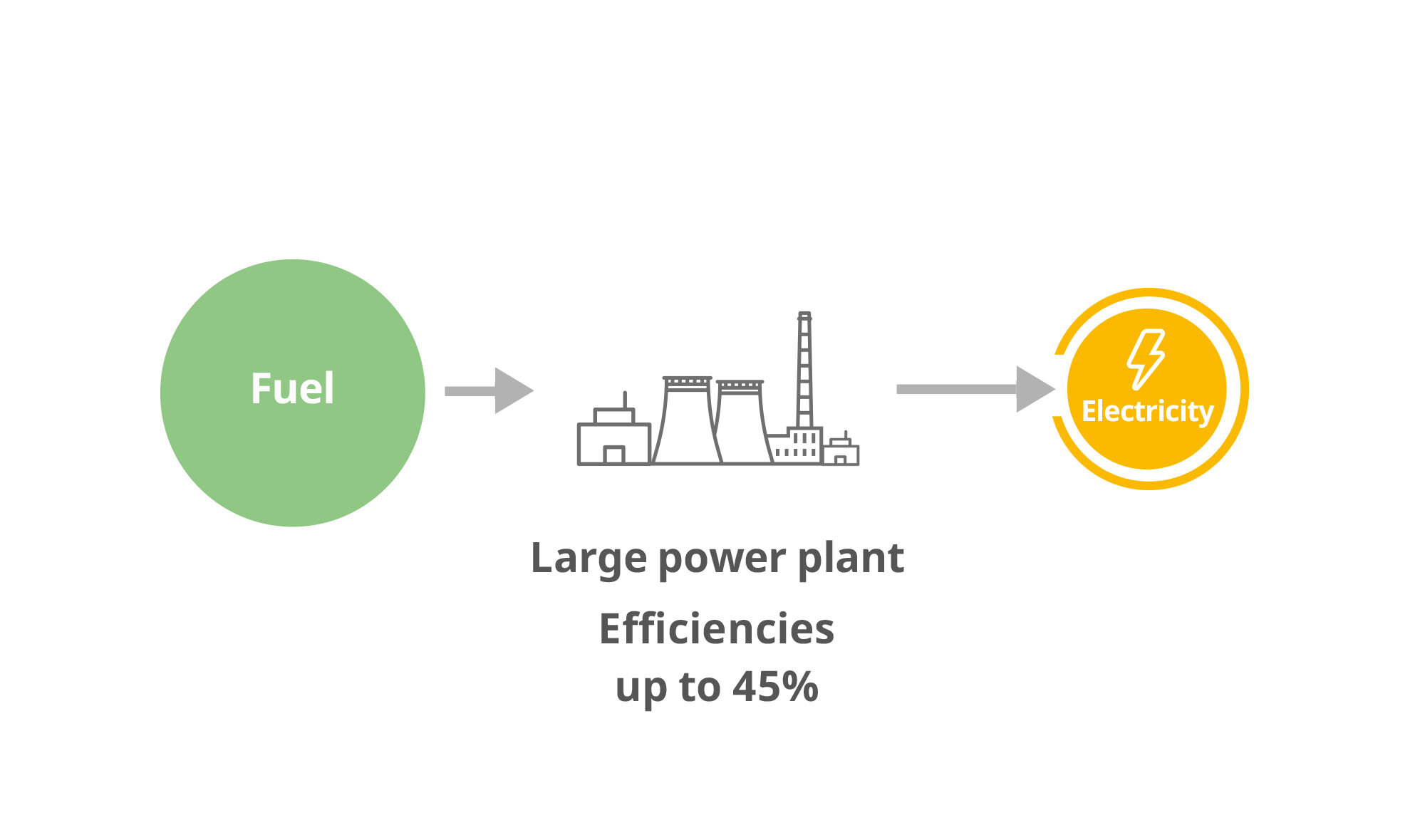 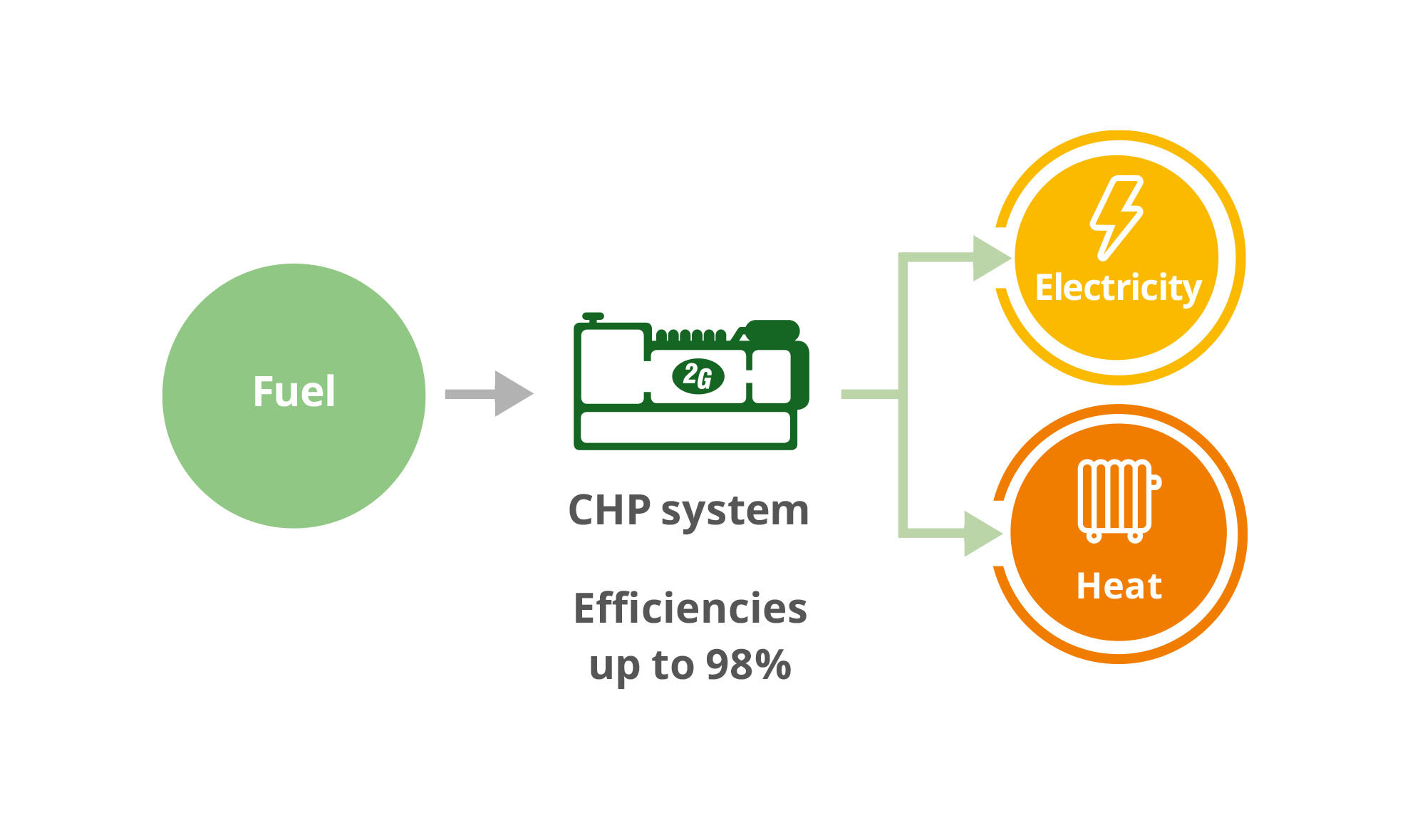 What is meant by "decentralized energy supply"?

Cogeneration is a means of decentralized energy production, meaning that the energy is usually produced directly at the site of its consumption.

Unlike a centralized power station, the energy production of combined heat and power generation systems can be completely independent of the public energy network. This increases supply security since the generation capacities are spread out.

How does cogeneration work?

The main components of a CHP are the engine, generator, heat exchanger, and command and control units. Additional components, such as an exhaust system, and ventilation devices, can be specified by the customer per their needs and goals.

The combustion engine drives the generator, which, in turn, generates electricity. The heat generated by burning fuel inside the combustion engine is not disposed of through the cooling systems without being used. It is made available to the heating network through a heat exchanger, allowing up to 98 % of the primary energy to be consumed in the form of electricity and heat.

However, combined heat and power generation systems are not only capable of providing heating or warm water. The production of 'process heat' through steam, hot air, and thermal oil is also possible.

For engine-driven CHP systems, the following generally applies: The electrical output of a CHP directly corresponds to its electrical efficiency - in this case, more usually is more.

CHP systems can operate on fossil as well as regenerative fuels. Liquid fuels, such as domestic heating oil, vegetable oil, or biodiesel, can be used in compression ignition engines. Gaseous fuels such as natural gas, liquefied gas, and biogas (as well as lean gases with small shares of burnable methane like sewage gas, landfill gas, or firedamp) are used in Otto engines, dual fuel engines, or gas turbines.

In the context of the progressing energy transition, hydrogen is a prime candidate to become a commonly used climate-neutral energy source, with production via excess wind and solar energy.

How can a CHP fulfill my needs?

The product portfolio of 2G consists of solutions from 60 kW to 4.5 MW covering a wide range of applications. Since each CHP system can be specifically tailored to its intended application and is planned as part of a holistic solution, considerations of economic efficiency play a vital role from the get-go.

CHP systems can be operated with a focus on heat or electricity. Focusing on electricity means that the CHP's configuration and operation depend on the electricity demand. On the other hand, the required heat is the deciding factor with a heat focus. Needs for additional energies, like cooling, can also be covered if necessary.

Usually, the target is to have the highest possible system utilization rate, which leads to the full exploitation of available production capacities. However, the need for flexibly activated regulation and balancing capacities is growing parallel to the expansion of renewable energies. CHP systems can fill this need with an all-in-one solution.

The centerpiece of a CHP system is a reciprocating piston engine. Whether the energy produced with cogeneration can be considered renewable depends entirely on the fuel.

The fact remains that even when fossil fuels such as natural gas are used, cogeneration far exceeds the efficiency of conventional energy production. Additionally, the harmful gases inevitably produced by landfills and sewage treatment plants can be used to produce energy and thus be withdrawn from the environment - two wins at once.

Cogeneration is already contributing to a significant reduction in greenhouse gas emissions. Thanks to the possibility of a simple conversion of a 2G CHP from natural gas to operate on hydrogen, the groundwork for a climate-neutral operation is readily available.

Bottom line: Cogeneration is more than a bridge technology...

It is the backbone of the energy transition.

The optimal utilization of fuel for the combined production of heat and electricity leads to an incredible operational efficiency - and, consequently, to reduced energy costs.

Due to the insignificant acquisition cost - even in comparison to massive, centralized power stations - investing in a CHP pays off in no time.

Unlike when heat and electricity are produced separately, finitely available fossil energy sources are being utilized far more efficiently.

Cogeneration is environmentally friendly because CO2 emissions are reduced significantly.

Energy production by means of cogeneration is decentralized mostly taking place directly at the place of consumption and is therefore independent of the public energy network. Consequently, the availability of heat and electricity is always guaranteed.

Why your microgrid needs 2G CHP